It was the perfect sunny day in April to watch the Boston Marathon.

I left our Airbnb early, figured out the subway stop, and waited my turn to be at the front of the barricade lining Boylston Street, several blocks from Copley Square where it was only about 10 people deep. I didn’t have a chance getting this close to the course near the finish line, so I was thrilled to find this midrace spot. The app let me track my husband along his run. Over the next two hours, I slowly made my way to the barrier as spectators left. I was set in front and ready well before he was scheduled to make the corner and turn onto Boylston. I knew to look for a bright orange singlet. My husband had no idea I would score a front-row vantage point among over a million ardent enthusiasts.

As he made his way closer to my point on the course, other runners were seeing their families along the barricade and running over to them, hugging them, kissing them, high-fiving them. I recruited a spectator next to me to take our picture when my husband came to the rail. Soon I spotted him and started yelling his name. I jumped up and down. Leaning over the railing, I waived my arms like I was herding raging cattle, flapping the makeshift sign someone had handed me. The guy next to me offered to help yell louder. Soon a small group joined in.

My husband never even glanced in my direction.

He ran right past.

Some of Us Have Never Rejoiced in the Middle of a Marathon, and It Shows

Defeated, I relinquished my coveted position to someone else’s family fan club waiting behind me.

Once we were finally reunited on the other side of the finish line, I asked if he had heard me. He said, “I thought I heard my name, but I don’t know anyone else here, and I assumed you were staying in the room. Besides, it sounded like a man’s voice, so I figured it couldn’t be me they were yelling for.”

After a bit more probing, he admitted he had convinced himself that the probability of it being me at the fence was very small, and he should keep on running to maintain his time. He could always celebrate with me later.

The Best Place for a Celebration

Although I support my husband’s love for running, as a nonrunner, I’m usually not jazzed by the associated sport talk. But after a four-year run with heart failure, I’ve started noticing something about prolonged challenges:

Somewhere in the middle is the best place to celebrate.

Highly-trained long distance runners (like my husband) can hit a point several miles in where a long race starts getting easier. This “runner’s high” is a feeling of extreme well-being when endorphins, dopamine, and other biochemical substances are released in the body.

Chronic illness fighters know the drill of the long course. Storm clouds continually darken and threaten, questions often nag, pain still visits. As we wade through this stagnant pandemic, perhaps many of us can relate to that phase right now. Yet many have found the runner’s high, a sort of “midrace joy.” And it’s deeper and richer than situational happiness.

The apostle Paul often used race metaphors in his Spirit-led writing. During his midrace prison term, Paul knew “the surpassing greatness of knowing Christ Jesus.” Paul knew how to find deep joy within the long challenges of life.

I have a bad habit of waiting to the end, the sure last chapter, to let down my guard and rejoice. (I’m way worse than my husband.) But that’s an inconvenient and sobering stance to take with heart failure and in a pandemic.

Here’s what I’m learning: It’s ok to celebrate in the middle of a crisis. In fact, it’s necessary. And we are not discounting the world’s suffering if we do.

Midrace joy is a form of worship: showing love to a God who will never abandon us and recognizing this in the messy middle, while He still could.

Midrace joy is a form of worship: showing love to a God who will never abandon us and recognizing this in the messy middle, while He still could. Click To Tweet

Lifting up God is the most powerful experience not when we get what we have asked for, but maybe most purely when we don’t. It is more honest and real to honor God before everything comes together, while it still feels like it’s falling apart. That way we are honoring Him and not the result.

Joy is possible and necessary in the middle because that’s the only place true worship happens. Perhaps our race is dragging on “that we might not rely on ourselves but on God.” (2 Cor 1:19). It’s where Paul began writing the book that talks so much about running the good race.

When this is all over, I want to remember that I need Him just as desperately on my best day as I did on my worst.

He is as faithful and real in the middle as He is at the end. The middle is the tough part, though. It’s where jobs are uncertain, marriages teeter, healings haven’t happened. The middle doesn’t have the optimism of the beginning or the thrill of the end. But the middle is where every race is won. Because it’s where the story unfolds. It’s where life is lived.

Midrace joy is an act of rebellion against fear, as Katherine Wolf describes in Suffer Strong. It’s an act of celebrating the life we have and accepting whatever is ahead that we cannot see. The dark middle days are where we learn He’s not just a Healer, but a Resurrecter.

The dark middle days are where we learn He’s not just a Healer, but a Resurrecter. Click To Tweet

And the joy comes in knowing that even when every fiber seems to be coming undone, when every muscle is out of energy and the path ahead seems impossibly long, we are never left to run the race alone.

We Don’t Always Know How Long the Race Will Be

The hard part about endurance races in life is that, unlike a true marathon, we don’t always know how long a race we’re in for. And sometimes we misjudge it.

From my journal three years ago:

We got amazing news at Cleveland Clinic. The heart that doctors said could never heal, somehow got better. The depression I was warned about never arrived. The meds that were supposed to bottom out my blood pressure never did. The trial that should have stolen my faith only strengthened it. Joy is overwhelming us right now.

I thought that was the end, but I am still midrace on this chronic disease.

Likewise, this period of history feels like a marathon with no finish line in sight. And even as believers, we struggle. Living in the shadow of faith in this mundane, maniacal middle. That is the challenging charge of our lives as Christians.

Marathons are difficult, even for the trained athlete. Also hard: chronic illness, pandemics, finances, relationships, life this side of Eternity.

But our midrace joy boldly echoes this truth along our unchartered territory. Although we don’t know the entire course, we know how it ends.

But our midrace joy boldly echoes this truth along our unchartered territory. Although we don’t know the entire course, we know how it ends. Click To Tweet

MidRace Joy Doesn’t Look the Same for Everyone

My husband should have run the Boston Marathon again yesterday. He had been training for it for months, and even has a room reservation he can’t cancel. But he is not grumbling or deterred about the race being rescheduled due to coronavirus. He still runs as if he is training for the next one, whenever that may be. And the joy he feels when he laces up his shoes each morning at 6:00 am is palpable, especially in the middle of a pandemic.

To be fair, he did run a personal best at the Boston Marathon last year. And he was in the top 30% overall. Pretty impressive for a first-timer at the legendary race. And who knows? A visit to the fence might have wrecked his rhythm or concentration or time. We still laugh about that, lamenting that we never got the picture I had meticulously planned for.

Knowing my husband’s love for the sport, he was rejoicing as he passed me last year striding down Boylston toward the Boston Marathon finish line. He had his eyes on the prize, like he always has in his Christian race.

And as we are all trying to do right now, he was still celebrating midrace.

It just looked a little different than I had expected. 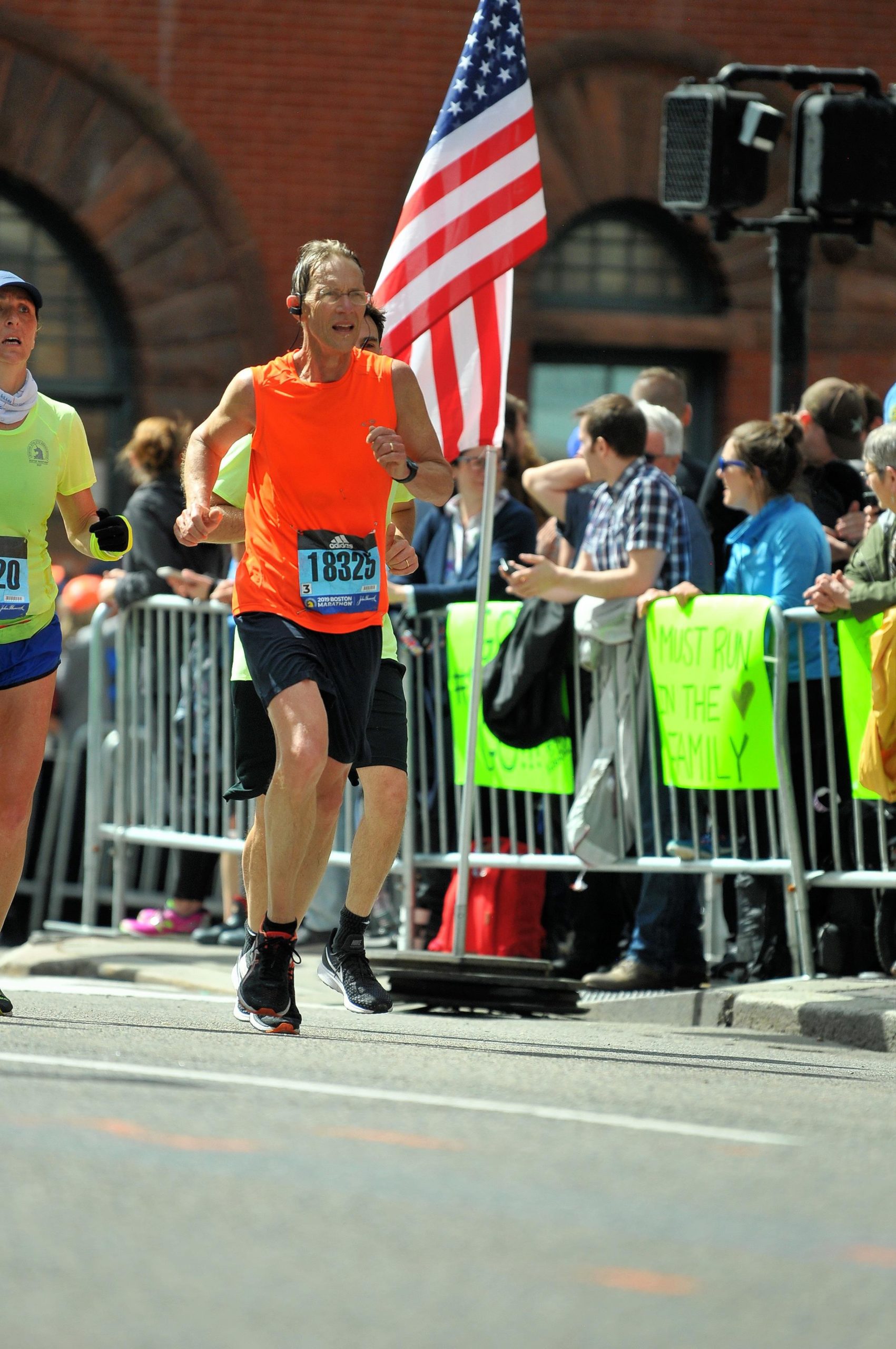 Previous Post: « This Isn’t Us: Grieving the Loss of Community
Next Post: Expectations and Promises: When God Disappoints »