Some scriptures just seem to overpromise.

Like the one about how believers can run and not grow weary, how we can soar on wings like eagles (Isaiah 40:31). I can’t remember ever running (or believing for something long-term) without getting super exhausted. And heart failure makes it nearly impossible to soar.

My husband, on the other hand, is a marathon runner. He’s good. He ran the NYC marathon and the Boston. So, you get the picture when I tell you he runs. He’s logged hundreds of miles, shed oceans of sweat, and worn out dozens of shoes. During those runs, my husband prays for the schools, people we know as he runs past their houses, government offices, businesses, churches. And he takes mental note along the way.

He ran past a stump and he took me back to it later in the day. It reminded him of my earlier posts about stumps.

It is a dramatic stump. Sitting in the middle of a front yard, a hope-filled tree must have one day been planted with dreams of a shaded picnic, maybe a bird house, or even a tire swing or treehouse. But that tree and all the idyllic plans clearly died, and the stump has been carved into a prominent pole-like structure topped with an ornate bald eagle.

When I first saw the house, I thought,

Good for them. They are embracing that stump. (And it’s an impressive one). They are making the best of a bad situation.

That was a couple years ago.

Deep into heart failure, I am weary from a recurring battle I somehow never expected: Fighting to not be defined by this disease. Struggling to make my life about more than the weak heart inside my body, and all my limitations that are emphasized during a pandemic.

I now question that ornate stump. I wonder why the homeowners would rather highlight the dead tree and miss the grand house behind it, and more importantly, the lives inside.

The imposing stump in front of that house represents the struggle I am feeling. And I have a hunch I’m not alone.

STUMPS CAN DEFINE US

Even before we have stumps to contend with, we ask it. We’re all born with this persistent question inside us: Who Am I? We struggle with resumes, applications, and even introductions well into adulthood. To answer this question, we turn to roles and relationships, positions and possessions.

And worse, sometimes what threatens to define us is not even something we love, but something we fight. Because our scars are real and raw, we can idolize our suffering, our role as a sufferer. We often place our worth in how we endure, instead of in Whose we are.

Sometimes what threatens to define us is not something we love, but something we fight. We can idolize our suffering, our role as a sufferer. We often place our worth in how we endure, instead of in Whose we are. Click To Tweet

Sometimes, like that house my husband found, our identity can be overtaken by a stump called chronic illness or infidelity, bankruptcy or infertility, without even realizing it:

Am I defined by the stump?

Because all this has happened, will all of me be consumed in all of it?

Will my life story always be overshadowed by this circumstance?

ENGULFED BY A SHADOW

“There’s a difference between where you’ve been, what you’ve done, what has happened to you, and who you are.”

Our good God defined the edges of our identity a long time ago: I am more than this temporary detour. I am not this stump. I am an eternal child of God. Still, as much as we know about Whose we are, our life circumstance often overwhelms our faith.

We call that house my husband ran past the Stump House now. Onlookers can’t even see the house anymore, because the stump steals the show. This was a stump that has been more than embraced, it has become the defining moment of this front yard. The stump has cast a shadow and defined that address.

A shadow is created when something blocks the light. Scripture often uses the word “shadow” to indicate darkness, doom, and death. But any of life’s dead-ends can block His Light and cast a shadow over our identity. For me, it’s been ongoing illness.

Some days I feel my life becoming overshadowed by my disease. I want this challenge to change my life, but not be in charge of my life. I read today about a study that found heart disease can dictate a patient’s identity. It’s a phenomenon called “Illness Identity.” In varying degrees, the disease has been found to infiltrate and sometimes overtake a person’s identity. Worst case is engulfment, where the disease dominates your identity. Best case is enrichment, where the disease causes positive changes in your identity, with a couple of intermediate stages between. Not sure where I am, but I can see the real pull toward engulfment.

Whether from our own mistakes, ricocheted consequences of someone else’s decision, or just living in a fallen world, we’ve all faced disappointment, stumps made from sawed-off hopes and withered plans.

And worse than eclipsing our identity in Christ, our stumps can sometimes obscure our view of Him.

We’ve all faced disappointment, stumps made from sawed-off hopes and withered plans. And worse than eclipsing our identity in Christ, our stumps can sometimes obscure our view of Him. Click To Tweet

Moses had some failures and disappointments, too. He had a few stumps that threatened to define his life and overshadow his God. Targeted at birth, raised outside his family, Moses then made some missteps of his own, killing the Egyptian for abusing his people. I’m sure as Moses was on the run for murder, his view of God seemed blocked.

But Moses’s story wasn’t over.

A different kind of shadow was on its way.

ANOTHER KIND OF SHADOW

The Spirit mentions another type of shadow throughout scripture. And it speaks to protection and comfort.

How priceless is your unfailing love, O God! People take refuge in the shadow of your wings.

Scripture and science agree: A shadow blocks the brightness of Light but a shadow also blocks the heat of danger.

Moses and the Israelites faced a stump or two while they wandered their desert for four decades. But they didn’t walk around alone. They carried with them the Ark of the Covenant. For early believers, it was one of the most important symbols of God’s presence. No coincidence it was topped by wings outspread. Despite dozens of disappointments, disasters, and dangers, Moses and his people found God’s presence under protective wings.

We drove by the Stump House again yesterday. This time I saw outstretched wings on it that I hadn’t noticed before. Because I had focused so much on the carving at the top. Maybe those wings were a reminder to me: Though stumps may cast a shadow, so do My Wings.

Let me tell you something about my husband, the marathon runner who found this interesting stump. He didn’t start running until after we were married and had three children. His running was prompted by an emotional trauma. When he was 38, my husband lost his mother, his younger sister, and his father, all within two years. He had an opportunity for the losses to define him and his God. And to be honest, they did for a while. But now these heartbreaks are just a chapter, or several chapters, in his life. It is not the whole story, or even the focus of it. Like Moses, my husband didn’t let the stumps overshadow his life. He focused on the shadow of his Father’s wings instead.

“Whatever has happened doesn’t define who you happen to be.”

Or Who happens to be taking care of you.

Scripture never promises we won’t experience the worst the world has to offer. But it does promise that when we do, we won’t be overtaken and we won’t be alone. Like being tucked inside my daddy’s jacket on that first unexpectedly cold fall day, the shadowy darkness is more about being taken care of, in the middle of the unanticipated.

When taken in its entirety, much like our lives, scripture always makes sense:

This side of Eternity, stumps will cast a shadow on who we are.

And while it’s often darker than we’d like, we are being sheltered.

Under God’s wings, in all of life’s shadows, we can run toward an unknown future.

And yes, even us non-marathoners can soar without growing weary or afraid. 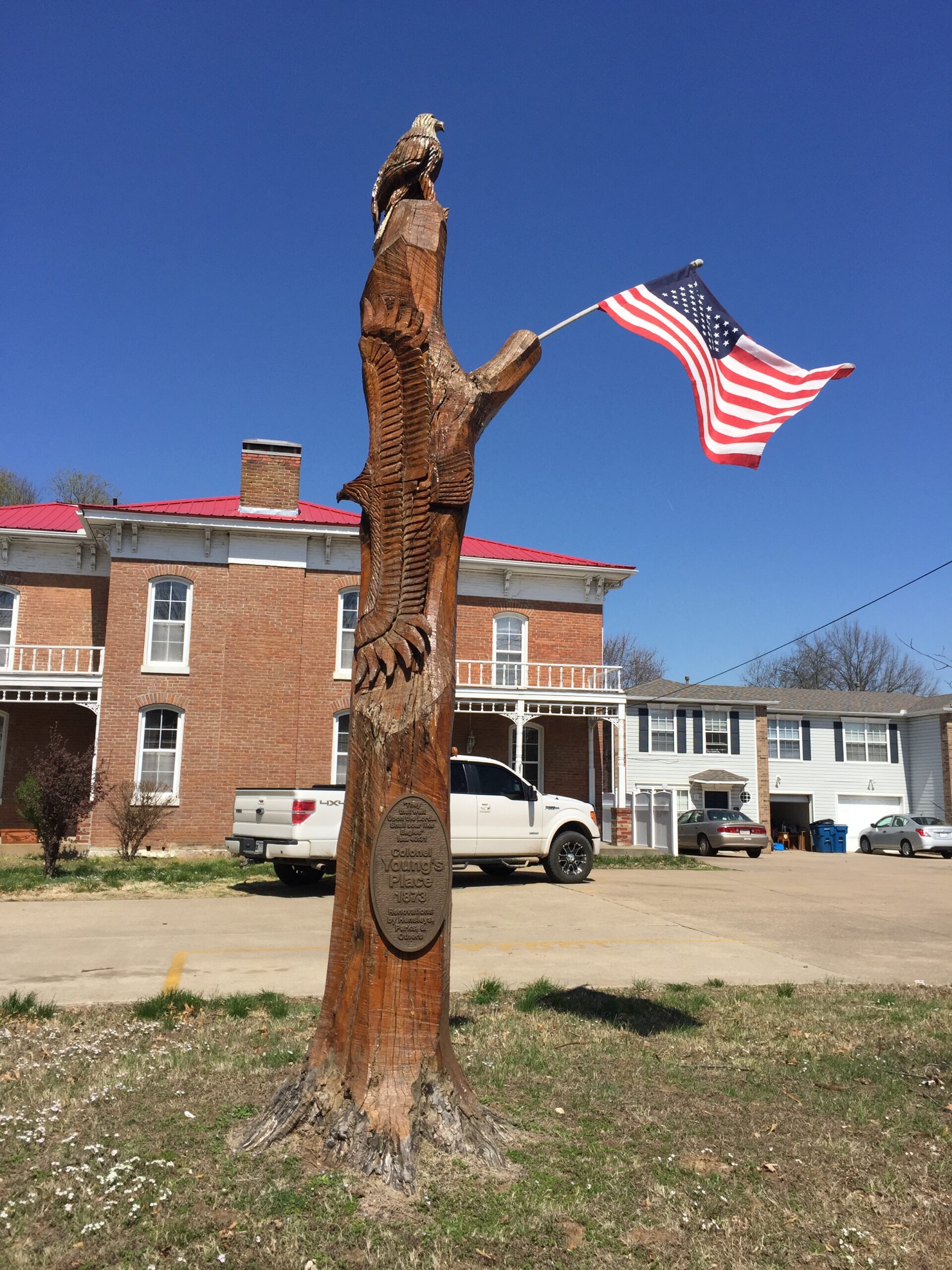