I’ve been through the events in my mind for years, trying to nail down how it could have happened.

This is my best guess.

One Saturday pre-chronic-illness, I walked into the kitchen to take my once-a-week bone density pill. As I unwrapped my pill, the phone rang. I answered the landline, my mother and I talked as I stood tethered to the wall. Our conversation reminded me that it was the first of the month, time for my dog’s heartworm medication. After hanging up, I found her pill, and dug into the fridge for the requisite cheese to wrap it in. My dog Mocha gulped it down. Then, realizing I never took my own pill, I reached for the remaining pill on the counter.

I looked at my 8-pound dog and panicked.

I called the emergency vet line and was met with a barrage of questions.

Receptionist: Yes, that would be toxic for dogs. How did the dog get your pill?

Me: I gave it to her…accidentally

Receptionist: That’s strange because dogs usually won’t eat human medication due to the smell. Me: I wrapped it in cheese.

(Prolonged silence on the other end as I realized how that sounded.

And as they considered whether they should call the ASPCA.)

Let’s just say I had some explaining to do, with the receptionist and with my nine-year-old daughter who came on the scene in time to see me purposefully shaking our miniature dachshund, etch-a-sketch style, per the vet’s instructions:

This mistake did not make me Mom of the Year, with my daughter or my dog.

If you’re like me, you’ve spent a good chunk of your life avoiding such notable mistakes. (Because, among other reasons, kids tend to tell and retell certain incriminating ones.) Honestly, all my life I had been subtly erecting an identity on being right. I wish I’d realized long ago that somehow the brokenness seems to find us anyway. Not always by our design, sometimes just by circumstance.

And other times, by ignoring a problem.

Though I had no risk factors and no family history, I had early warning signs of heart failure: shortness of breath, inability to exercise, fatigue. For years, my family urged me to go to the doctor. I wish I could tell you I listened to them, that I swallowed my middle-aged pride, that I went to my trusted family physician, that I shared completely and honestly in annual exams. I did none of those things. And that error damaged my heart and shortened my life.

MISTAKES CAN BE VALUABLE

Living with that mistake (which, conveniently, has the word “failure” built right in), has taught me another valuable lesson: Faults can sometimes provide an unrivaled opportunity. Psychologists and social researchers have found that mistakes eventually make us safer, braver, stronger. Once we recover and do a Correction of Errors, we learn what not to do, how to be resilient, and ways to survive future blows.

Author Kathryn Schulz in her book Being Wrong,

“It is ultimately wrongness, not rightness, that can teach us who we are.”

And I’d add WHOSE we are.

Are we alone in this mistake-prone venture?

Or do we belong to Someone who’s in control, despite our errors?

Our mistakes reveal our soul’s need for God.

While mistakes don’t define our identity, they do lay a foundation for the only relationship that should. Mistakes make us dependent on Him. It is our very imperfection that brings us to the cross.

This mindset removes the burden of faults from our days and from our destiny.

We recovering perfectionists need to remind ourselves as we approach Resurrection Sunday:

“God’s ‘well done’ says less about the worth of our works than about the wonder of his mercy.”

THE OPPOSITE OF WHAT SHOULD BE

Weighed by the metric of mercy,

When Jonah ran from God, when he chose not to do what he should have done, God had a fish swallow him. But Jonah did not die. In fact, he lived because of that. The fish, rather than devouring him, saved him. Maybe what Jonah learned best that day was this:  When God is involved, salvation can look like not being consumed by that which should consume you.

When God is involved, salvation can look like not being consumed by that which should consume you.Click To Tweet

An early taste of grace.

Like me, Jonah spent years running. God used Jonah’s mistake to save Nineveh, and ultimately, to save Jonah from himself. And the very disease that should have consumed me has, in many ways, saved me, too.

Over the past several years, I have felt my world closing in. Options, time, energy, the kids leaving, fewer outside activities. The realm I operate in has definitely narrowed. Mostly out of necessity. But it hasn’t affected me like I would have suspected. If I had looked into a crystal ball twenty or even ten years ago, I would have been terrified of the reality I’m living right now. But it’s just the opposite. I have peace. And I have discovered a strangely mended purpose.

Kintsugi is the Japanese art of repairing broken pottery in a unique way. Instead of making the breaks less visible, instead of trying to mend the piece as if it had never been broken, this art form exalts the breaks. The pottery is restored with lacquer and the cracks are dusted with gold. The result is stunning and unique, the opposite of a useless, broken vessel.

In much the same way, our mistakes create space for grace.

“Grace only sticks to our imperfections.”

Decades ago, I wouldn’t have believed it: We are more beautiful and useful in His Kingdom, with imperfections, with our breaking points defined, our past mistakes highlighted.

We are more beautiful and useful in His Kingdom, with imperfections, with our breaking points defined, our past mistakes highlighted.Click To Tweet

We mistake-averse believers must know that the only way we can stop the mistakes is to stop living. But we also know a God with a pretty impressive resume of turning broken into beautiful: doubt to truth, darkness to light, death to life. In our Father’s careful Hands, this painful pandemic will one day become the opposite of what it seemed, too. He’ll do the same for your secret addiction, your financial faux pas, even your parenting blunders (pets and people).

His touch has created the opposite of what should be: disobedient Jonah survived, my post-diagnosis faith is thriving. My daughter actually does call me for advice.

As for my dog, the trauma of the pill incident should have made her avoid me at all cost. But just the opposite. She forgave me. Not right away, but almost a decade later she snuggled next to me every day through the early shock of heart failure. Somehow, she knew something about grace.

I’m not who I was before.

In many ways, as I enter Year 6 of a five-year prognosis, I’m just the opposite.

A younger me was trying to substitute my own “rightness” for His.

I’m a bit more careful doling out medications now that I take so many. Mocha has passed away (from unrelated causes), but a new dachshund has taken her place. I’ve made a few mistakes with her as well, just like I did raising my children. Among others, my family will always remember that pill incident.

In the most important ways, I’m better now than I was then.

I’ve found that accepting grace overshadows the fear of failure.

Accepting grace overshadows the fear of failure.Click To Tweet

And, in the grip of that grace, I’m watching my mended life become the opposite of what it really should be. 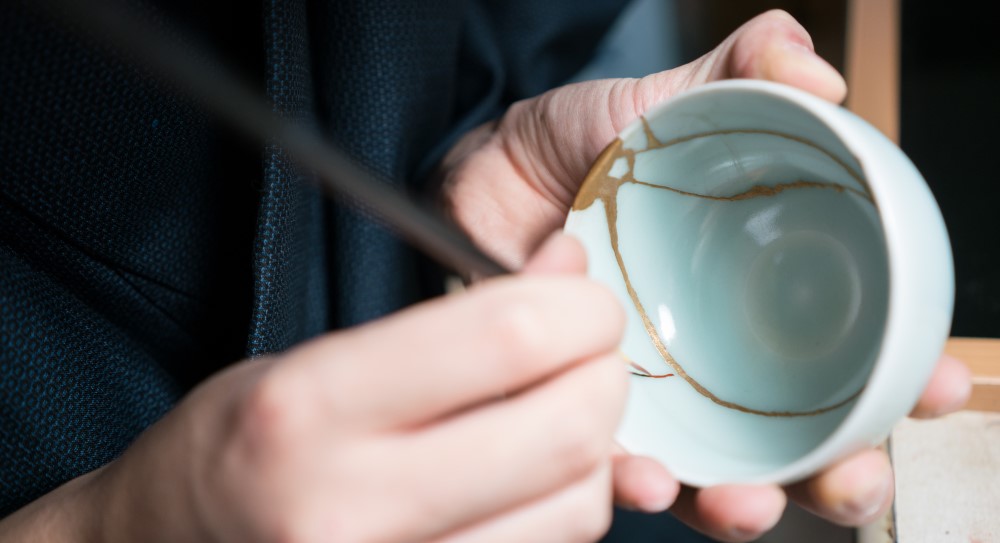