As my dad pulled up in his truck, I whisper-shouted in my huskiest 14-year-old voice from behind a tree.

My VW Rabbit had done its signature move and died in yet another public place as I drove home from high school. I had my reputation to protect, so my plan was to hide, summon Dad, and let him push it off the busy street, alone. There I was in the most public of places at 3:30 pm in my hometown:  the crosswalk in front of the grade school and junior high.  The car died after I rolled into it, so all the kids walked around my front-end encroaching on their crosswalk territory.

I needed help in a big way, but I also wanted to hide.

I wanted to be rescued, but I didn’t want to be vulnerable.

I was afraid of what peers might say the next day. As though by hiding I could pretend that neon green car belonged to someone else.  Then I realized I had the keys in my hand.  I thought about maintaining my anonymity and tossing them to my dad, but the look on his face said I probably shouldn’t.  He motioned me to help push the car.

According to social researcher and author Brene Brown,

Vulnerability is showing up and being seen when we can’t control the outcome.

Turns out, I had to be vulnerable to be rescued. I had to make myself known and visible.  Like the castaways on Gilligan’s Island or the victims of Hurricane Dorian, waving arms from the highest hill of houses or huts or hopes.

Shadrach, Meshach, and Abednego knew something about showing up and being seen when we can’t control the outcome.  The trio showed up with their faith, were seen refusing to bow to a false god, and risked the result.  The king ordered them thrown into a blazing furnace.  They, too, needed a rescue.

The thing with vulnerability is, the rescue never looks like we think it will.  Those three Jewish boys would surely have hoped to win the king over, or miraculously disappear before being hurled into the agonizing intensity, but God’s rescue involved them going into the fire, and even walking around in it for a while.

Sometimes showing up and being seen, exercising vulnerability, will hurt. Temporarily.  The world might laugh, we might face some extreme heat. Vulnerability risks shame and uncertainty, but also is the only  birthplace for love and joy. Above all, vulnerability binds us to the Father.

So we never have to walk around pre-rescue alone.

Shadrach, Meshach, and Abednego were seen walking through the fire with a fourth figure appearing to be the Son of God.  At our most vulnerable times, He walks with us on the path we didn’t choose.

As we all will, those three guys eventually did die, perhaps decades later. The physical furnace rescue wasn’t for good, but it was to establish a good relationship.

The whole point of the rescue was the relationship.

Recently, Dad accidentally facetimed me.  I think he meant to do a normal phone call, but when I answered I got a close up of his ear hairs.  Like an episode of Magic School Bus, Through the Ear Canal. In the last few years, he got a smart phone, an iPad, joined Facebook (actually, he may have beat me to that one).  He has never been afraid of new technology or new ideas.  This brilliant scientist/businessman/teacher chooses to be vulnerable.  He risks looking silly to stay connected to me and my siblings.  He has always assumed the risk of vulnerability for the rescue, and for the relationship.

Likewise, this God asking for our vulnerability is no stranger to the concept. He’s demonstrated it from Eden to Calvary to my stubborn life. As Christopher De La Cruz says, “God loves this world with an abandon that leaves God vulnerable to pain.”

In doing so, He has demonstrated how faith is forged.

In fact, faith is the highest manifestation of a relationship built on vulnerability.

We all want a life hack for faith, a shortcut.  But the brand name, full length version is all that will work. It takes repeatedly showing up and being seen. And repeated rescue.

My car died again and again in surrounding towns and communities, right outside the high school, our driveway.  And my daddy showed up every single time.  (And many more times he rescued me by retrieving a forgotten math book or eating unwanted food off my plate that I was “required” to eat.) We eventually traded that VW Rabbit in. I was totally relieved to turn over the keys of my once-beloved dream car to the used car dealer.

In the spirit of vulnerability, faith means we don’t get to control how or when the rescue happens. But in the Spirit of God, we know that it will.

I can’t really see how all of this is going to play out.  The story arc looks a little bent.  After my bad heart report, I wanted to skip church today, so I didn’t have to face disappointed pray-ers, questions, sympathetic hugs. For the sake of my faith, and for theirs, trying to reconcile this outcome with prayer chains, anointing, expectations, promises. People don’t need to see a confusing plot up close. But I decided to go, to live the story that’s actually happening.  To lean in to God’s narrative, as much as I wish it was a different story.  Humanly, I just don’t see the end of this anymore. I can’t see how He’s going to step in and save the day, but after all we’ve been through together, somehow I believe that He will, in His own way and time.

Faith is realizing that even when, like with my VW Rabbit, I’m not feeling enough guts or grace to show up, He always does.

My dad has been there through many rescues. And by doing so, he’s taught me a lot about vulnerable faith without ever saying much about it: Faith requires that we keep showing up and being seen, even when, especially when, we can’t control the outcome.

That we come out from behind the tree, put our arms in the air and our feet in the furnace.

When we do, God’s saving Spirit will show up, too.

And we’ll never walk through the fire (or push our car through the school crosswalk) alone. 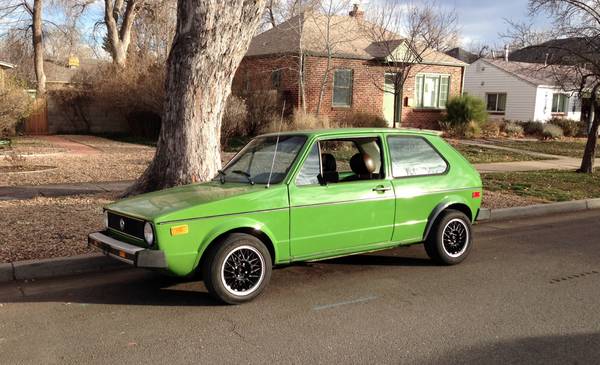 10 thoughts on “The Rescue”