The first contest I ever won involved a tiny clay sculpture I crafted and submitted to the Harper County Fair. I remember being very surprised that I had won a ribbon, considering I had only taken one art class.  And I was sure the other entries came from professional artists.

Empowered by that Reserve Grand Champion ribbon, I asked for a pottery wheel for Christmas the next year. But then my sculpting dreams died somewhere around fourth grade when I realized that it wasn’t a highly valued career choice in rural Kansas in the 70s.

Honestly, I didn’t feel like I was good enough.  As hard as I tried, I never felt like a real artist.

For at least ten years following the fair victory, I had a recurrent dream.  It started out like a blank home screen on a computer (in those days, more like a snowy TV screen after midnight).  A white, blank rectangle.  Slowly from the top left corner, something would start creeping in. After I had this dream a few times, I knew exactly what that thing was:  a witch.

She came in and grabbed a lump of clay that had appeared in the middle of the space.  With her long green fingernails, she started to insert wire throughout the clay.  I begged her to stop, to not ruin my clay by putting wire in it, but she just laughed and continued.

Lately, I have thought about that dream often.

Another witch has now begun putting wire in my creativity:  Imposter Syndrome.  That feeling of phoniness, despite achievements and credibility, living in fear of being exposed.  Neil Armstrong suffered from it, John Steinbeck did, as well as Maya Angelou, Albert Einstein, and many other very accomplished people.

So it shouldn’t come as a shock that a much-less accomplished person feels it, too.

Writing is new for me.  I have little training in this field.  My blog is less than nine months old.  Feelings of inadequacy abound.  Often, the words in my head sound so unique, so insightful, so groundbreaking.   But on paper they seem so ordinary, so trite, so warmed over.

Technically and philosophically, I struggle with the social media required to be successful as a writer.  I fear I have missed my moment with Facebook and Instagram.  And Twitter is even more foreign to me.  But without them, I feel incompetent to communicate the story God has entrusted to my life.

Sometimes I even wonder why I write.  Is it helping anyone?  Is anyone reading it?

Doubt and fear from the Enemy can cause us to shrink back and lose our voice.  He gets in our heads and renders us useless.  Even Moses begged for an exemption, feeling that his own words could never be enough.

The bible is full of many followers who felt that they were imposters, inadequate, not the real thing, not enough:  Gideon, Joshua, Solomon, Jeremiah, even King Saul.

Every human heart suffers from this affliction:  big tasks to do, overshadowed by a crippling feeling of incompetence.

But the God who made us out of nothing whispers through the overwhelm, “When I choose you for something, I already know you are enough.”  In first Corinthians, “God assigned you a life to live.”  It may seem unlikely.  It may bear no resemblance to your childhood dreams.  It may seem awkward.  But if you are walking in step with the Spirit, it’s right where you are supposed to be.

I know even in my Christian walk, I have felt like an imposter, a plagiarizer.  Often, the words coming out of my mouth, like the words flowing off my keyboard, seem to be someone else’s.  I was just borrowing them out of convenience.  Or safety.

But then I realized that the words are borrowed.  The Spirit has given me words to say, in life and in writing. They taste foreign because they are made of more than we are.  Jesus Himself said that the Holy Spirit will give us the words to say at just the moment we need them.  They may not be our words, or our message.  But that makes us no less the uniquely chosen messenger to deliver them.

My daughter’s close friend is a ghostwriter.  Ghostwriters are writers for hire who take money but none of the recognition for the work produced.  The listed “author” takes all the credit for the ghost’s original writing.  Apparently this is common practice for everything from websites to business copy to full-length books.

Our God is the real author of this blog and of my life.  The website may have my name on it, but the words come from the Ultimate Ghostwriter. I have had the privilege of seeing firsthand that only He decides when and how to move the plot along.  And what characters to use.

Two years ago, I had wires inserted in my chest and in my heart to keep me alive.  When those wires went in they could have made my heart useless, but instead they made it stronger.  Right now, I am out of transplant range.  My heart became even more alive, even more “enough.”

The wires in our creative clay and in our Christian life can do the same.  Instead of making our words useless, they can spur us on to something much bigger.

Take it from a County Fair Reserve Grand Champion:  the wires are there as a reminder.  You were chosen for this.  Use His Holy words, His Sacred thoughts.  You may feel like an imposter.  But with God as your Ghostwriter, you have already been made more than enough. 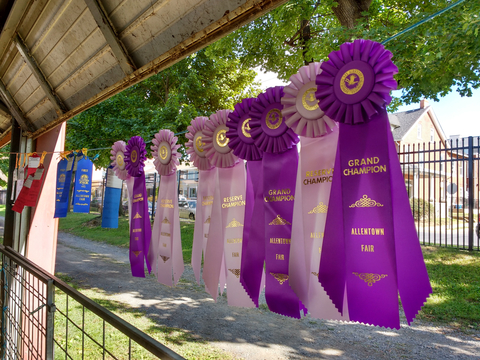