A thought that has been distinct in my world the last few years mirrors the story of a child frightened to sleep alone in her room.  Her worn-out mom reassured her, “Have you tried praying?  Jesus is always with you.  Don’t you believe that?”  The little girl replied, “Sure, I do.  But right now I need someone with skin on.”

When I was up to my ankles in mud in the pigpen, I didn’t want to admit it, but I needed someone with skin on.  I needed real-time, tangible ideas and practical help.   I was also up to my ankles in powerlessness when we left Cleveland that day after getting more disappointing news.  But God was waiting for me to be weak so He could show His majesty.  And He was waiting for me to acknowledge my neediness to others.

God’s power is made perfect in our weakness, and many times that power comes through other people.  I have written about my miracle assistants (aka prayer warriors, stone movers) a couple of times, and they play one of the most central roles in my story.  But they were unlikely characters in the plot. To be honest, I wasn’t having open auditions.

My family was already unwittingly accomplices.  I didn’t want to pull anyone else into the mud with me.  I wanted to believe that the world could still exist as it did before my illness.  So my first inclination was to insulate others who didn’t need to be part of my pain. But I will always be grateful that they insisted and persisted.  First, in being involved at all, and then, in not leaving me along the way.

From the beginning, one friend texted me daily when praying, and gave me a wall calendar filled in with the specific prayers she was offering up each day for me and my family. Many others stepped in with more prayer chains, notes, cards, books, text messages, meals, unexpected flower deliveries.  I rested in the thick, downy comfort of this early support.  But weeks turned into months, and then months became years.  Many days deep into this mess I felt like I was wearing my prayer warriors out.  But they never wavered.

Instead, they doubled down, determined to pull my toes out of the mud and help set the watering tank upright.

They have mirrored Jesus back to me on days I couldn’t find Him with a magnifying glass.  Scribbled cards I had sent, hurried prayers I had mumbled for others, meals I had thrown together, or purchased and repackaged.  I never imagined they would come back to me in such sweeping, overwhelming measure.  Like a warm blanket the ICU nurses would fetch for me when they felt helpless to do anything else, these simple acts sustained my faith as I fought on.

Every relationship needs an element of physicality.  It is no different for our relationship with God, maybe even more so.  When we are suffering, it is difficult to love an invisible God we don’t understand.  Jesus came as God with skin on.  Now the body of Christ, the group of believers here, continues to spread real life love to the world.  And their hands-on care cements a flimsy relationship of the hurting person with their still-faithful God.  “Miracle Assistants” aptly named.

That day at the Cleveland Clinic when I had no improvement despite all my best efforts for seven long months, I thought about those pigs.  I thought about the little girl who felt so hopeless and helpless.  And I realized I was no longer that little girl. I realized that we were never meant to be alone, even in the mud.  I needed to fall back on my stone movers and let them continue to carry me, so I could carry on.  A week later I made my next journal entry:

I know that I have no reason or excuse to be depressed or to wonder, “why me?”  and I haven’t experienced much of those.  People seem surprised about that.  But I have had so much support.  Even though I resisted it at first, I have dozens of my church family and hundreds of others praying for me constantly.  I have an amazing support system at home, mostly due to my husband. We have great insurance and we are not worrying about how to pay for all of this.  I have access to the best heart doctor in the country, arguably the world. So many people with this disease have none of that.  I am extremely blessed to be walking through this mess with so much help.  It is keeping me sane right now.

Even as I resisted help along the way, I clung to the peace it manifested in me.  Author Kate Bowler calls it the “floating feeling” and described panic at the prospect of losing it.  St. Augustine referred to  “the sweetness” and Thomas Aquinas, “the prophetic light.”  It is the sense that a good God is in charge, whatever may come, and that my prayer warriors have had an integral part in His divine, concentrated attention to my life.  That would never have happened if I hadn’t allowed these precious people into my pen of pain from the beginning.

That pigpen wasn’t the last time powerlessness got the best of me, and it wasn’t the last time I found myself sinking in mud, but it was one of the most memorable. I walked back to the house that day, muddy and barefoot, but a little wiser.  I was going home to make a long distance call to Dad’s office.  Sometimes you need help from someone with skin on, even when you’re eight-going-on-nine. 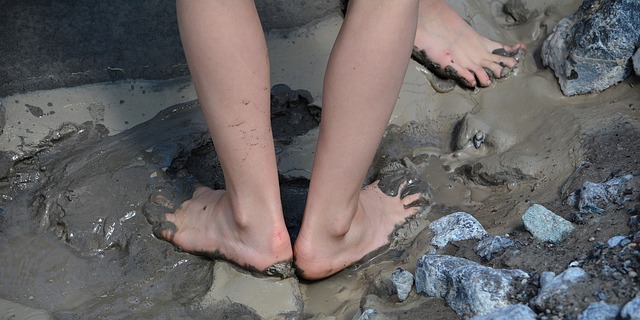