Decades ago, my older, now-engineer brother constructed a complete, intricate N-scale model train. It was more than a train.  It was an entire city.  My brother and dad worked on that plywood platform, the size of a banquet table that resided in our unfinished basement, all the years I was growing up.  It was assembled with enviable precision and patience, strictly off-limits to clumsy little sister hands. Still, I would crawl into a chair and watch from an approved distance.  Tiny buildings, waving families, intricate trees, even working streetlights:  I was amazed at that powerful aerial perspective.

Mostly, it intrigued me that you could see all the obstacles on the track, ones the passengers and even engineers would be oblivious to.  We knew about the impending trouble before the train arrived!  I carried that visual in my mind as how God must perceive our lives, seeing it all at once, from beginning to end, unbound by our concept of time.

It has been a comforting picture, with God as the Creator and Sustainer of the world.  Nothing is unknown to Him.  He’s keeping tabs on my heart function, and even my hair loss. He sees every accident, every obstacle, every stumble we make, and He knows it before it happens, just as my brother could see the miniature tree blocking the track long before the train engineer in that tiny world ever could.

I can now look back and realize that God was there during every uncertain minute of my past 30 months with heart failure.  Even though I sometimes doubted His care, doubted His involvement.  He knew what was happening, He was watching, and He never stopped loving me.  Even when all I could see was the obstacle on the track in front of me, God indeed held my whole lifetime in His hands.

Even better than just knowing about the future, He exists there.  Wherever you are headed, God has already been there.  Cancer, divorce, bankruptcy, depression, heart failure.  Even death.  Jesus has undoubtedly been there.  He’s ahead of you, building a track, turning on the lights.  And once He’s done that, our God stands above the concept of time, cradling our worries.  Because worries are simply fears of an unknown future.  And no future is unknown to the Everlasting.

God was ahead of Jesus’ Gethsemane agony at the empty tomb, ahead of Mary’s hometown shame in Bethlehem’s manger, ahead of Jacob’s slavery sale in the King’s castle, ahead of fearful Jewish slaves in the Promised Land.  God works above and apart from our human, linear timeline.  He sees it all and He is in every moment.

We can say this because we all have God’s eye views of their stories through His Word.  But our stories are still being written, none less intricate or less beloved or less Spirit-involved than these.  And yet, often we think of those as the main event. And our stories as footnotes…or less. That our lives are less God-touched, that our lives are somehow less important to God.  Or to God’s continuing story.  That He no longer bothers to go ahead of us.

This feeling of insignificance breeds fear, and fear manifests itself in worry.  Worst of all, when worry grows up, it can become control. So we can take over the reins from God, just when we need Him the most.  Sometimes it takes something big to convince us to do otherwise.  For anyone who has a serious illness, you know that the scalpel of the diagnosis can reach in and cut control right out of your soul.  And that can be a life-saving measure.

Long after the final work session ended and plastic permanently covered my brother’s railroad village, something new filled our basement.  My aunt delivered cardboard flats of handmade silk corsages and bouquets for my wedding. (Don’t judge.  It was the 80s.)

Weeks later my mom catered my wedding reception.  That’s right, the Mother of the Bride.  Everything was homemade from scratch, even the bread.  (As a recent MOB, I can’t even imagine.)  I had planned the ceremony in detail, but the reception was all her.  I remember going from the church to the reception hall after photos, knowing everything was taken care of, even though I had not set foot in the hall to prepare it. My mother who loves me beyond reason had already been there…somehow.

Faith requires us to stretch our trust into the unknown.  Into a future unknown to us, but fully known to God.  Corrie ten Boom says, “Never be afraid to trust an unknown future to a known God.”  A knowing God.  He’s got this, and you can trust Him.  Someone who loves you enough to die for you is way out ahead of you.

My parents are now going through some significant health challenges.  They will face some very uncertain days.  Mom and Dad live five hours away.  I won’t be able to be there every day in the coming weeks and months. And my heart aches over it.  But I am comforted that, like my brother, designer of the model railroad village, God sees where they’re headed.  And He’s already there. 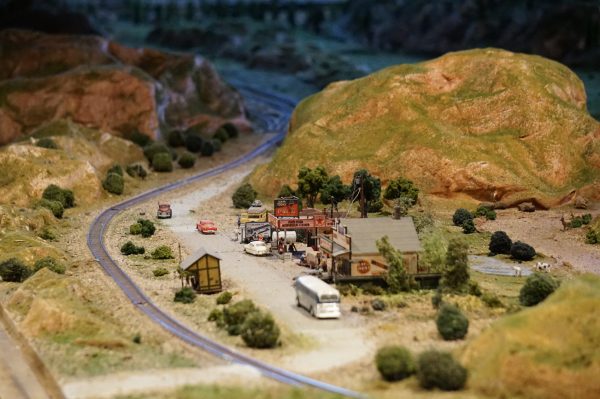