In the waiting room of my doctor’s office recently, I saw a woman reading a bible who looked familiar to me, but I couldn’t place her.  Then her husband came out to meet her, and I remembered right away.

He had been in cardiac rehab with me nearly three years ago.  He was the class ambassador, the welcomer, the face of the group.  He asked what a young healthy person like me was doing in cardiac rehab, and he listened carefully while I explained about the Life Vest I was lugging around.

First day of cardiac rehab.  Nice older man showed me all the machines, and told me stories while he did so.  As we were riding the stationary bikes, he said, “All that matters at the end of the day is that I love the Lord, and I have a wife who loves me with all her heart.”  Pointing to a lady in the waiting area, he said, “Just look at her over there, in the black sweater, on the end.  I still smile every time I look at her.  We met when she was 15 and I was 17.  Then when she was 18 and I was 20, we got married . . . 57 years ago.  I look back and think, we wasted three good years there.”

This man endeared himself to me quickly.  I admired his faith, his attitude, his commitment, and his resilience. He was recovering from heart surgery and looked fantastic.  He inspired me; I was in much worse shape than he was at the time.  I finished rehab and lost touch with all of my classmates.

So when this man came into the waiting room today, I was surprised to see how much he had gone downhill.  He was on oxygen, and using a walker.  But even today I saw his signature smile, and I remembered what he told me about wasting three good years.

I wondered what he thought about me: did he see me as better, or worse?  Sometimes change is so slow we don’t see it in ourselves. Or in those we love.  But moments come when reality steps in with commanding clarity.  Like looking at the back of your head and seeing the strands of gray that must have been there for months.  Or visiting home and realizing your parents are much older than they should be.

Entropy is a term from thermodynamics that is used to indicate a general trend of the universe toward death and disorder. Decay is part of life in this fallen world.  Eternal physical newness will never be found here, even with Botox, demi-permanent hair dye, and cardiac breakthroughs.

As I have lamented before regarding my children, time here only moves in one direction.  And the march is constant. Our mortal world and everything in it are in constant decline. Entropy.  My son recently got a new car and I didn’t realize how old mine was until I saw his.  But as he pulled away to drive that car 1500 miles back to grad school, I knew next time I see his car, it will be older.  And so will he.

In this environment of constant deterioration, staying the same, holding your own, is success.  Especially so with heart failure.  It is a progressive disease, so not declining is winning.  All those months with no change was actually a victory, and even now, in not being hospitalized, I am beating it.  Sometimes progress is treading water.

While the world spirals into decline, the faithful have become adept at treading water.  And we should never be ashamed of that.  We are all fighting a stiff undercurrent.  We are all wearing the lead shoes of a fallen world.  But the Spirit keeps our head above the waves, and we persist.

Faith is forged in that persistence of the everyday.  In the treading.  And in this way our present is made new.  We see it differently, so we live it differently.

Still, we can come into the fray of illness, or into the middle of life, looking for physical renewal.  And that pursuit can consume us in a selfish, primal sort of way.  Eventually we realize that holding on to our faith is what matters and what is far more challenging in a world ruled by entropy. But far more impactful as well.

Paul was holding on, treading water, when he wrote during his prison terms and up to his impending death.  He was trapped, and going nowhere.  Or so it seemed.  But his chains created a hunger for newness and furthered the message of the gospel in a way that few other events in history have.

The last three years have emptied my nest, filled my medicine cabinet, and challenged my faith.  It is no coincidence that my youngest child moved out at the same time my disease moved in.  In God’s economy, those three years were not wasted.  He has been creating in me a space to yearn for something new.  God will eventually satisfy that.  He will redeem all of time.  We will one day see newness in full, not just for today, but for yesterday and tomorrow as well.  Meanwhile, we faithfully tread our now.

At first glance, it seemed that the last three years had been hard on my cardiac rehab friend.  But when I spoke to him, I saw his unwavering smile.  And when I saw him gently clasp his wife’s hand with one of his while he steadied himself on his walker with the other, I knew it had truly been another three good years.  For both of us. 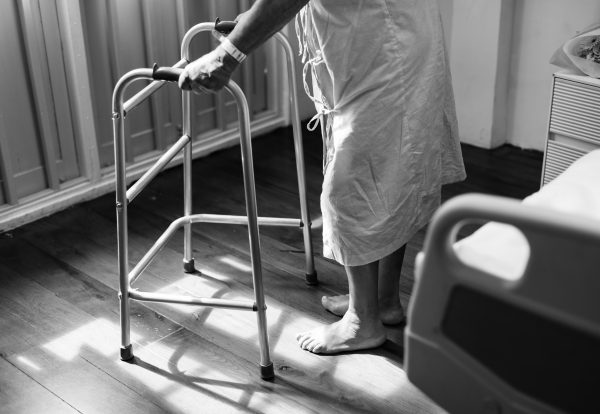