My dad is a fearless guy.  And the most resilient person I know.  But he’s also the most intelligent human being I’ve ever met.  Sorry, grad school professors and transplant surgeons.  He’s got you whipped.

With such good genes, I thought by this age, I’d surely know everything.  But the older I get, the less I’m sure of.  I do know a few things.  I know miniature dachshunds are the best dogs in the world.  I know mint chip ice cream will fix anything, temporarily.  I know “better late than never” is a lie.  And I know God is good.

If I’m being honest, sometimes that last one can waver.  Most of the time I would say I believe it with all of my heart.  But times come when I do question.  Usually when something in my life seems out of my control, and I sense that God has abandoned ship.  The pain, the betrayal, comes in knowing He can fix it.  And then finding myself in the Western Hemisphere where I can’t see the lunar eclipse, where I can’t see His hand moving.

My dad recently got a serious cancer diagnosis.  He just started chemo.   He will be 83 in two weeks.  Throughout my health ordeal, Dad has been one of my biggest prayer warriors.  Despite everything he is suffering physically and emotionally, he still signs thank you cards by saying “Pray for Lori Wood.”  I want him to be healed and whole, and yet I know the answer may be no.  I may not see God’s hand move in this situation.  Sometimes I wonder what a good God is trying to teach me here.

Truth is, hardships and disease and disappointments are not from God to teach us a lesson. Broken bodies and broken hearts are part of this broken world.  But God can use them, redeem them.  And as we learned from Job, He can allow them.

Here’s the glorious part: God will not allow an injustice or a suffering that will not one day be restored to overflowing.  Author Tim Keller puts it this way:  God only allows bad things to happen if they can become good, if they can eventually unravel themselves.  Evil in this world will ultimately undo itself.

Romans 8:28 says that everything works together for good for believers.  One day.  In the bible, Joseph’s brothers sold him into slavery, only to find Joseph years later in a position to save them from starvation.  The brothers meant the separation for harm, but God used it for good.  Maybe more good than anyone could have imagined.  Job’s suffering also was redeemed to overflowing.  But as we live it, the questions arise.

In his suffering, Job was not asking for relief so much as for an explanation.  He was willing to suffer for a reason.  But when he needed God most, God was silent.  And when God did speak, He did not offer an explanation, only more questions.  We often never know the WHY this side of Eternity.

Tertullian, in the year 197 wrote about the Christian martyrs: “The blood is the seed of Christians.”  Killing them had the opposite effect of what was planned.  When one Christian was killed or imprisoned or driven out, ten more sprang up in his or her place.  The evil actually worked to spread the gospel rather than snuff it out. Satan meant it for harm, but God used it for good, multiplied.  Redeemed to overflowing.  But not in the lifetimes of those who suffered.  In this life, they never saw the WHY.

Maybe part of the answer is that bad things equip you for work that only you can do. Though it’s a position you never would have applied for, you become the perfect candidate.  Because of what you’ve been through, because your journey was unique. For Joseph, it was the saving of many lives.  For us, it may be something on a smaller scale, but no less important.

I can look back on my life and see how God has redeemed situations for good beyond my wildest expectations.  I know without heart failure, I wouldn’t be writing.  I wouldn’t be as close to my family, especially my dad.  Or as close to my God.  I am in a position now to trust in a God who can make abundant good out of the worthless, the rotten, the greatest pain I have experienced.

Do I always trust Him?  No.  Do I always believe He will redeem the worst day of my life for good?  No.  But I keep coming back because the Holy Spirit is continually tugging my heart into a relationship with the only One who can possibly redeem this broken life.  After all, what Job wanted, what we all want, is not so much God’s explanation, but God’s presence in the middle of the un-knowing.

I don’t know what ultimate good will come because of Dad’s suffering.  But I do believe that it will one day be clear. Redeemed to overflowing one day.  And maybe that day, Dad and I will both know all the answers. 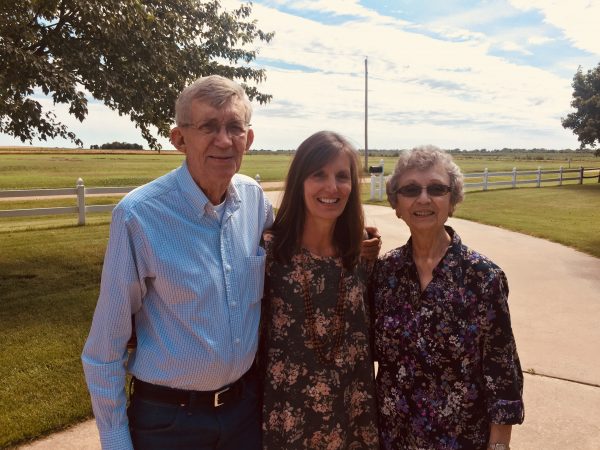