If you read under my story tab, you will learn that I asked for this. Not specifically, of course, but in a roundabout, God-is-listening kind of way. I wanted to have a clear sign of what God envisioned for the rest of my life. I had made some great plans, all involving worthy causes, and I was beyond ready to implement them. I honestly was thinking we would foster children. With an empty nest comes empty bedrooms and empty hearts, and I was sure God was leading us to fill both. Instead, He had a stump story in mind. It was just not like any stump I had ever imagined.

A good friend visited me in ICU after I was first diagnosed and said, “God’s doing something big here.” Instead of being comforted, I was angered. I wanted Him to go to some other room and do something big. I wanted to go home, back to my old life and my old plans. I wanted the PICC line out of my arm and the defibrillator out of sight. It wasn’t until several days later that I realized my friend’s visit was a sort of reminder buzz for me. I had prayed for insight, and now I was getting a pretty clear vision of what He had planned.

I had always feared cancer, as I suppose most of us do. My family line is full of cancer, on both sides. Both of my parents are battling cancer right now. I have had friends die of cancer, and I hold my breath every year when I get a mammogram. Yet, a disease I had no knowledge of would hijack my story. How had I never feared heart disease? How did I not know that it kills more people than all forms of cancer combined? I suppose I just thought it could never happen to me somehow. I thought I knew my story.

Several months ago, we stopped at a convenience store on our way back to my hometown in Kansas. As I got back into the car, I noticed a huge stump in an open field next to the gas pumps. It was so unique, I stepped out to take a picture. The original tree had obviously been a large, mature one. But the remarkable part was that in the middle of that dead, rotten, crumbling stump grew a brand new tree. The new tree was not even the same species as the hardwood stump it grew within. I couldn’t help but wonder if the old stump had protected it and allowed it to grow. I also smiled at the irony, the convenience store as the birthplace of this very inconvenient reality: Adversity uniquely prepares you for something new. Sometimes that something is very different from the original plan.

Heart failure gives you a very inexact prognosis. We have heard many times from the medical community, “We just don’t know.” We can find mortality rates and hospitalization numbers on the internet, but doctors are wary to give you any guesses about what your personal future holds. At first this really bothered me. I wanted to know everything I could and then I was sure I could handle it. I just needed to get my mind around it. (Probably seeking control of the situation again through knowledge.) Months later I realized that this is all of life. Everyone is dealing with the not knowing. The only difference is that before I thought I did know: I would live to be in my 90s based on family history of longevity and how well I had taken care of myself. The only uncertainty in my mind was what would happen in those carefully planned years. And honestly, I thought I had a good handle on that as well.

But God’s perfect storyline involved some faith, some suffering, lots of prayer, and a stump. He would handle the new growth from there. And He has been hard at work in the forest of my life, removing old, useless trees, and getting sprouts to grow from stumps. Meanwhile, I am learning to trust Him in ways I never could have before my illness. I am so thankful to get a second chance to experience the swallowing-up grace of that love. Still, my constant challenge is to fully rely on the One in charge of everything new, whatever that will be.  And to daily control the urge to call in the stump grinder. 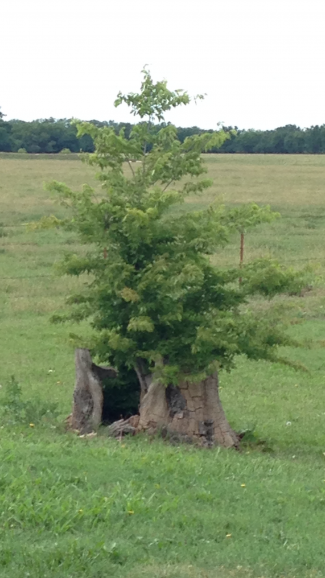