For some strange reason, right in the middle of heart failure, we decided to host our daughter’s wedding…in our backyard. So you’ll understand why when I tell you that, about a year ago, we did a little landscaping. (And by “we,” I mean a guy with a backhoe.) Mostly tore out overgrown bushes and trimmed trees. Long overdue. It’s funny how that type of thing sneaks up on you until a few of your closest friends and new in-laws are invited over. Yet it almost seemed wrong to tear them out after years of feeding and watering and tending to them. But like college-bound teenagers, it was time for them to go.

Once some dead trees were cut down, I was reminded how much I detest stumps. They don’t bother my husband but he knows when he’s met his match. He conceded to (unnecessarily) grind the stumps, and reluctantly, paid extra for a stump grinder to get them out. It was worth it to me. No one plants a tree hoping to someday have a great stump to show for it. Stumps represent defeat and death and dreams that didn’t work out. My tendency is to grind that sucker down so I never have to remember that the plan was foiled. And no one else can see that I failed.

But God specializes in stump stories. He loves to take a dead-end story and turn it around more than anything. “Out of the stump of Jesse” He brought forth the Savior of the world. Out of the line of Bathsheba, with all the heartache and mistakes and shame. He has taken many through this route of the stump story when all seems done and lost and dead, and breathes new life into it: He did it for Abraham and Sarah, for Joseph, for Lazarus and Mary, for Paul, and for Jesus…and He’s doing it for me. I have to remember to embrace the stump because it’s part of the miracle. In fact, without it, the miracle would be somehow incomplete.

One of my journal entries from several months ago:

On my way into the doctor’s office for a nurse check, I heard the song Mended by Matthew West on the radio. The lyrics just seemed to be telling me something…”How many times can one heart break?…When you see broken beyond repair, I see healing beyond belief…I’m not finished yet…You see the scars from when you fell, but I see the stories they will tell…”

I parked away from the building, walked up a slope, even took the stairs to the second floor. Walking into the cardiac waiting area, I saw the familiar hurting people in wheelchairs, people who wished they could be like me! I made mental note of this being my first time there without the life vest. I was feeling pretty normal.

I talked to the nurse about my CRT-D scar and she said that’s the best one she’s ever seen. We did a little high five that the life vest was gone. On my way out, I ran into my cardiologist. He asked how I was doing, and I told him pretty well, but the surgery recovery was more difficult than advertised. I wanted to know when we could do another Echo to see if it was helping. Then he said something that broke my heart…

“Now you know, we don’t expect much recovery of heart function. Some people get a pretty good bump, but not people like you, with END STAGE HEART FAILURE. Dr. H and I both think that yours is just too advanced. But…you never know!” Then he patted me on the back and said, “You just keep on living.”

GULP. Those are stinging, haunting, bitter words that continue to echo in my mind and wake me up at night. But I am choosing to hold on to the peace of the deep knowing I have. That my scars still have a story that needs to be told.

Without that dead-end stump day, my improvement would not have been so dramatic, so memorable, so miraculous. I cried that day and so did my husband. Our pain was deep and real and did not go unnoticed by our good God. Just as Jesus waited in the tomb for the weekend, we waited to hear from God. He was planning a rebirth. And as much as I would have liked to grind it away, all of my stump chapter, like Jesus’s, like yours, had to be written for God’s story to be complete. 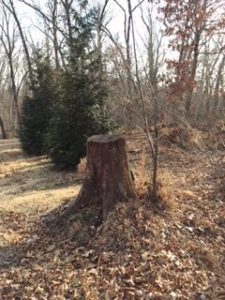