In fourth grade my back-to-school shoes were a hurried decision.  With four of us to outfit on a single shopping trip to Wichita, my mom had her hands full.  Toward the end of the day, at one of our last stops in the mall, I settled on a pair of tan suede oxfords with thick soles.  I wasn’t in love with them, but Orange Julius was calling and we were all exhausted, so I quickly convinced myself that these were the ones.  I didn’t think much about those shoes for a week or two, until school started and it was time to show them off.  Opening that box, I immediately got that sick feeling of regret, knowing these were my FOURTH GRADE SHOES.  For the entire year.  My older sister tried to talk me into liking them.  I felt a little better.

A few days later, I was wearing those shoes on the playground.  With the school year new, pecking order and friendship cliques were still being established, and I was well aware of what was at stake.  After playing tag for a while, I retreated over to the swings to rest.  About that time, I heard a rather outgoing boy from my class laughing hysterically and pointing to the ground where tag had taken place.  “Someone’s shoes say GASS!  Whose shoes are those?  Are you kidding me?”  Apparently, someone’s shoes left the embarrassing print and other kids started to gather around to see what the fuss was about.  The boy started going around checking the bottom of everyone’s shoes to see who the culprit was.

I felt my face get hot, even as a distant witness from the swing set.  I picked up my foot and looked at the bottom of my own shoe.  My worst fear was suddenly realized.  It was my print.  Then I remembered:  we bought them at Kinney’s,  The Great American Shoe Store.   For weeks, I tried desperately to scrape that logo off my sole with a stick and then a kitchen knife, but it was too deep and too permanent.  Fourth grade was a long year for me in the shoe department.

Any time we suffer, we leave footprints.  Any time we live, we leave footprints.  But suffering leaves a certain, more noticeable set for others.  We observe the pain of others to desperately try to make sense of our own.  So having walked in the valley, our footprints are subject to an increased scrutiny of those around us, partly out of concern and love, but also out of an intense desire to understand it all.

Whether I am ever completely restored or not, I will always be different for having walked in that dark place.  For many who have, it is both a burden and a privilege.  The difficult journey itself as well as the responsibility you feel to others who have come alongside.  I remember particularly dreading returning to church after many months of no improvement.  People wanted to hear good news, to have their faith and prayers validated.  And when that seemed to not be the case, I did not want to be the bearer of bad news. I felt responsible for helping boost their faith walk, rather than destroy it.  So sometimes I just smiled and said, “We’re doing fine.”  I fell into a role of what I felt like was covering for God.  At one point, I had reached my limit.

2/14/16 – Valentine’s Day.  Heart Day.  Not in the best mood.  I decided I’m not going to fake it at church anymore.  If someone asks me if I’m feeling better, I’m not just going to say, “Yes, great, getting better!”  I know that’s what they want to hear and I do appreciate them asking, but I’m not sure it helps anybody if I just say what they want to hear.  So now I’m just saying, “Hanging in there.”  Because the truth is that I feel the same as I always have, once I got over the hospital stay weakness and healed from the heart cath. Unfortunately, that doesn’t tell us much in this case.  An older lady from church who had had her own share of near-death scares stopped me on my way out and really listened to what I was saying.  She listened for maybe 10 minutes.  At the end she said, “You’re a walking miracle.”  I told her I was just trying to keep up the walking part; the rest was up to God.  Even as I said those words, I wondered where they came from.  I felt my attitude and hope rise up from the floor of the room. God had sent another angel to me in the middle of my tantrum.  It felt good that someone listened so carefully.  I need to do better at that for other people in their journey.

So rather than being responsible for their faith, those footprint observers have been propping up mine. Helping guide me, as I walk through this, some of them right next to me, and some cheering from the sidelines.  If it weren’t for the print I never wanted, the print I was horrified to see for the first time two and a half years ago, I would never have known the closeness I could feel with these fellow travelers, and most importantly, with our merciful God.

Still, the chronic illness footprint is different somehow.  It is not merely a slight detour, but a decided change in route.  The hope for complete restoration can sometimes fade into merely hoping for good days that outweigh the bad.  I cannot scrape that print away or pretend it belongs to someone else.  I have come to appreciate the great privilege God has given me to walk with Him and others through that challenge.  I have decided to now embrace my footprint instead of erase it.  I only wish I’d had that in me in fourth grade. 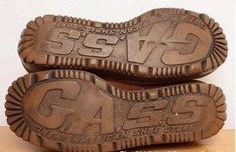