My husband has had a tradition of “wrestling” with our kids since they were little.  He was a wrestler in high school (still owns those pants), and he taught them the holds and rules.  So ever since they were four or five, our kids would wrestle with my husband before bedtime (sort of counter-acted the kids’ calming bath routine).  I was not included in this, thankfully.  I just listened from another room, and inevitably someone would get “hurt.”  Nothing serious, and maybe it was more feelings hurt than bodies hurt, but I always heard that plea for help before they finished.  Strange thing is, they always wanted to wrestle again the next night.

In Genesis 33, Jacob spent the night wrestling with God amid fear of his angry brother approaching.  Jacob would not stop wrestling until God blessed him. Often doubt or pain may cause us to wrestle with God until He blesses us.  We know Him, we trust Him, and most importantly, we know He can.  So we wrestle.  But it seems that the blessing always comes with a wound.

In the tiff, God dislocated Jacob’s hip.  I have identified with Jacob, as a wrestling observer, but more recently as a participant.  I felt like I wrestled with God for a blessing as I have struggled through my illness.  In that encounter, God has dislocated my sense of security.  He has taken me through valleys and through a control crisis to reveal Himself more fully along the painful path. But in that dislocated pain, I have been blessed beyond measure.  If necessary, God might hurt us to increase our faith.  In my case, it took a significant health event.

Another interesting parallel, as with Jacob, my greatest ally showed up at first looking like my worst enemy.  My disease looked like something to defeat and overcome, but now looks more like an avenue of blessing and companionship with God. But first, the wrestling had to take place.  Not because God had to be convinced to bless me, but because in the wrestling, He had even more blessings in mind.  The blessing of knowing Him, and fully trusting Him first came to me in the disguise of chronic illness.

And most importantly, the wrestling and the pain have caused me to focus on God rather than on my fear.  If I had not known the doubts and the cries of abandonment, the only cries I could have would be of fear: fear of the unknown, fear of death.  God knew the longings of my heart were much more important than the longings for healing of my physical body.  Indeed, the wrestling forced Jacob and I both to step away from fear and focus on God. I am still learning this art of wrestling with God.  I am learning that it requires a faith I did not have before, a faith I now realize I need to build.  That type of tenacious faith requires you to wrestle and then stand to face the very thing that would try to break you.

The words of the hymn, “My Only Hope is You,” have been part of this wrestling match.  For months as we sang this song in church, I felt it was only for me, that I was uniquely suffering.  I begged God to be real and to help me through my ailment.  But it wasn’t until I realized the bigger truth, did I get the blessing.  Jesus is our only hope every day, whether we are 100% healthy or on hospice care.  But not until that helplessness was palpable and affirmed by fellow wrestlers, did I believe it.  Even though it is true every day, every year, this truth somehow eluded me, until I could keenly feel it, physically.

My children remember the wrestling days fondly. My daughter sent my husband a picture of a text she was studying last year in college.  It was from A Discourse on the Ideal Renaissance Man, “Moreover, I deem it very important to know how to wrestle.”  Although my children realized they risked a rug-burned knee or a scratch here and there, they knew their father had their best interest at heart.  Any ensuing pain was worth forging that relationship with him, a relationship that would help get them through the rest of their lives.

They still crave it, and so does my husband. When my grown kids were on their way home for the holidays last year, my husband sent them a text:  “Tonight, we wrestle.”  I smiled, because now, in some small way, I understand. 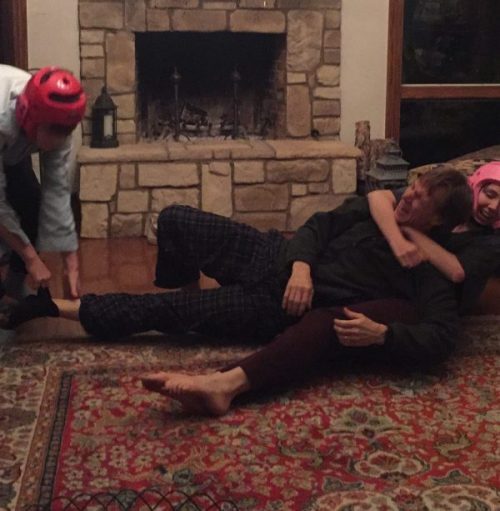