They’re surely gone now. The elderly couple from Enid, Oklahoma, we befriended just weeks after we were married:  Virgil and Ann.  We spent time in their home and in their garden.  Mostly, we were admiring their marriage, though.

We moved away, and in pre-cell-phone, pre-social-media days, sometimes people you knew stayed in your past. Virgil and Ann would likely not remember us, even if they were alive at about 110.  But we never forgot them. What they modeled to us has become part of our every day.  To put it simply, they adored each other.  This couple had no children of their own, so literally each other was all they had as they neared the end of their lives.  Each other and their faith.  We picked up on both right away.

My husband and I have subconsciously, I suppose, drawn on their example as life has started to get difficult.  We have actually reached that point where life has stopped giving, and has started taking away.  But deep inside we had mentors who subtly taught us how to weather that storm together.  We had spent time observing Virgil and Ann.

Not long after we moved away from them, we bought a framed pencil drawing that reminded us of Virgil and Ann.  Same body shape, same hat, same way they would hold hands even with a cane in the other. We have hung that picture in every home in every city we have lived in since.  We have used them as examples in classes we teach, and we talk about them to each other, still.  Virgil and Ann would probably be shocked to know the impression they left on a young married couple back in the 1980s.  That their quiet example continues.  With no children, I’m sure they thought their legacy would die with them.  What they may not have realized is that by simply investing their faith in this young naïve couple, they were part of something that would outlive us all.

We all need to be part of something bigger than ourselves.  If you have children, you’ve bought into it.  We never expect to see the final grade in that course.  But we pour into them anyway, partly out of an overflowing storehouse of love, but also out of a sense that life goes on. And in some way, we want to be part of that, even this side of Heaven.

Some people write books or build buildings or establish scholarships.  None of that is bad.  We are just acknowledging that after we are gone, part of what we have done here may be useful to others.  But we don’t need to build a monument or even raise children to be part of the future. The human soul is the only thing that will survive this planet.  That’s where we should all be investing.

No one got where they are today by themselves.  We stand on the shoulders of many others.  It’s the way the human race has advanced.  Who wants to start over and reinvent fire or penicillin or the internet?  But individually, we too are accumulating masses of input from a myriad of sources.  Many, like Virgil and Ann, going about their quiet mentoring just by living their faith-filled lives.

Dozens of teachers have invested in all of us without ever expecting to know how it would all turn out:  Jim Morris, my fifth grade teacher, first gave a painfully shy little girl confidence to speak in class.  Later, my high school debate coach Gary Harmon would plant a seed that I could be a public speaker.  I think of Ruth Stringfield and Shelia O’Neal who took my own little (and not so little) chicks under their wings, protecting and molding their characters and abilities.

I am grateful for the hundreds if not thousands of shoulders I have had my feet on throughout my life.  I’ve already written about my miracle assistants here and here.  l will never forget them or their resolve.  And the way they have tirelessly hoisted me up to the ear of God.

Truly, I am indebted to an army of people who have invested in my life and in my soul.  Not only my parents and siblings, my teachers, and my prayer warriors, but also a league of medical professionals has supported me throughout this journey.  I will give tribute to them and their human compassion in my next post.  If our #1 need is God, surely our #2 is each other.  I know I owe years of my life to the scaffolding that has ungirded me and my family since my diagnosis.

An African proverb says, If you want to go fast, go alone.  If you want to go far, go together. Pre-illness, I was usually in the fast lane. I’m so glad that I slowed down long enough to meet Virgil and Ann, Jim, Gary, Ruth, and Shelia, and all the other shoulders who have borne my burdens over the last two and a half years. Together, we are going farther than anyone ever thought we could. 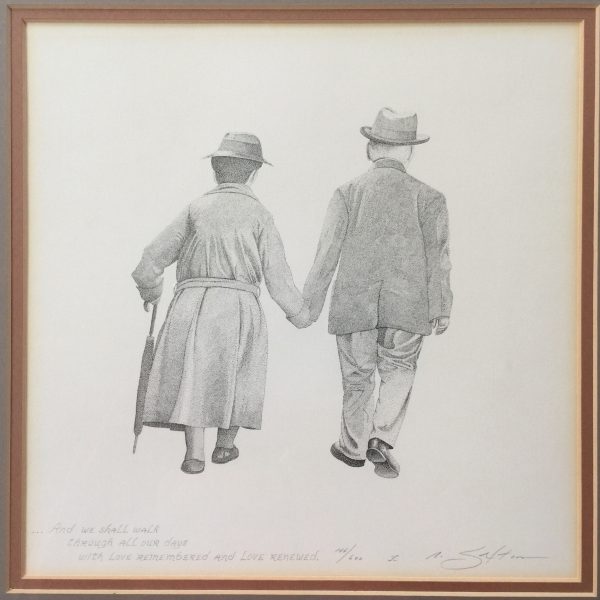