Late last week I finally shopped for a Father’s Day card.  As I was checking out what was left on the racks, a woman about my mother’s age came up behind me.

The lady reached for a card, frowned, and put back card after card.   I assumed she couldn’t find the sentiment she was looking for.  Then I inferred that she must be buying a card for her husband behind her and she didn’t want him to see it.  The well-dressed gentleman stayed a few steps back, smiling.

Finally, the woman asked me to read the cards for her.  Leaning in with a heavy whisper, I read several to her.  Returning each card to the rack, she muttered something about macular degeneration, followed by, “It’s terrible to get old,” and then began enumerating what she could no longer do.  I said, “I understand,” thinking I was more like her than she realized.  She answered, “No, you don’t…just wait.”

I pointed out another card and she handed it to her husband.  He happily read it out loud.  The woman turned to me and said, “It’s perfect.  Thank you. He’ll forget what he read by Sunday.”

Right up until the end of that encounter, I thought I understood.  But this woman was dealing with much more than met the eye, even the observant eye.

Invisible illness is rampant. Nearly half of Americans live with a chronic (long-term, incurable) illness.  96% of those chronic illnesses are invisible.  Before I was assigned one, I was not aware of how prevalent this silent suffering is.  Or maybe I chose to ignore it.

Since my diagnosis, I have been looked at with a questioning eye many times:

At my daughter’s college, from the visitor’s desk attendant when asking for a permit to park closer so I could avoid the insurmountable hills while moving her in;

At the Acropolis in Greece from the ticket taker telling me the elevator was just for handicapped people, not for people like me;

At courthouse security, from the guard assuming my life vest battery pack was clearly a contraband camera and asking me to take it off;

At the airport from the disapproving young mother with a baby and toddler when I cannot help her retrieve luggage from the carousel.

I’ve learned that a person can look healthy and not be.  And this makes the burden even heavier.  Someone can appear just fine while suffering, which forces them to defend their actions or prove they’re ill.  All the while trying to rise above it and carry on with life.

And like living itself, invisible illness ebbs and flows in severity. On a hot summer day, I look with envy at the handicap parking spaces at Wal-Mart.  On another day, I might walk a slow mile for recreation.  Many days I am surprised that I make it through the day.  Other days I can forget I’m ill at all.  And then there’s always the nagging knowing with the chronic type of invisible illness that you’re partners for life.

So I like to think that because I live with my own form of invisible illness, I can always see the suffering of others.  I can’t. I’ve been trying to strengthen my eye for the invisible, and I have discovered it’s actually a heart issue.

In one of my favorite childhood books, The Little Prince, Antoine de Saint-Exupéry says, “It is only in the heart that one can see rightly, what is essential is invisible to the eye.”

Christianity would agree. After all, eyes for the invisible is what all of faith requires.  Not seeing things that aren’t there, but fully seeing what is.

Believing with the heart “the evidence of things unseen” by the eyes.

Our eyes alone, without the heart, were never meant to discern the full truth.  As Paul said in Ephesians 1:18, we must have “the eyes of our hearts enlightened so we may know.”  Otherwise, as Jesus warned in Matthew 13, we will be seeing but never perceiving, and our hearts will become calloused.

From my journal a few weeks ago:

I’ve been irritated that our neighbors haven’t fixed their mailbox. It has dangled from its one remaining screw into the street for weeks.  We’ve seen lots of people coming and going from the house, as the entire property has spiraled into disrepair.  I walked past that rundown house today.  A lady about my age in a wheelchair was at the mailbox, struggling to fix it.  I felt ashamed for my irritation. Then I wanted to explain why I couldn’t pick up the heavy iron post for her.  I wanted to let her know that I looked normal and uncaring but I was neither of those.  And I wanted to tell her I was sorry for what I thought.  It was a strange situation.

I’d never seen my neighbor until she appeared at her mailbox. But my calloused heart assumed she was lazy, or irresponsible.

Our brain works to manage the overwhelming amount of information it encounters every day. We assume and we draw an easy conclusion.  We think we understand and look right through the person suffering.  Our heart must compensate for the times we stereotype too quickly, too harshly.

Because in those times, we don’t see at all.

As CS Lewis put it, “To see through things is the same as not to see.”

So perhaps the most important lesson I’ve learned is that, formal diagnosis or not, everyone is healing from something:  emotionally, spiritually, physically.  Many times it can’t be seen with a passive glance.

For those prone to seeing through –

Invisible illness awareness is as simple and as profound as this:  Everyone deserves the same accommodation, the benefit of the doubt.  The blessing of being seen in a grace-filled light, of being seen with the heart.

It might be the screaming child with a sensory disorder; the “lazy” teenager with Lupus; the grouchy retiree who lost the wife of his youth; the over-instagramming mom battling depression, the scaling-back minister with Lyme disease, the sturdy young vet holding a sign asking for money.  Very real, life-consuming battles.  Gaping wounds and healing scars we can’t see.

For those suffering silently –

When a nagging pain throbs silently beneath the surface, and the world assumes that everything is ok, know this: an invisible illness, a hidden heartache, a covered crisis, never goes unseen by our good God.

As the older couple walked away from that card display, I thought about my neighbor.  And I saw them all again for the first time, with my heart. Their days must be frustrating and long and lonely.  I thought later that I missed an opportunity to ask them if they know the Lord.

But one thing I know for sure:

God knows them, and He sees their suffering.

Even when human hearts grow calloused.

Even when mistaken eyes peer right through. 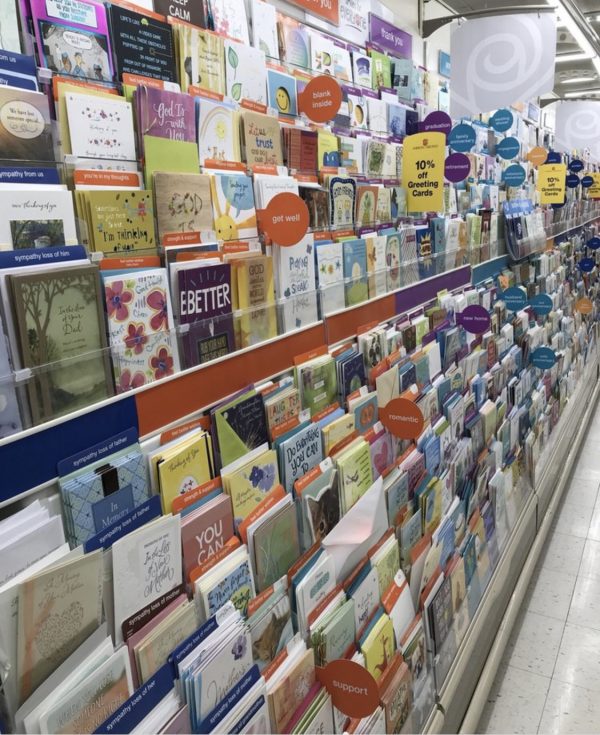