There’s no way around it. 2020 is shaping up to be one long season of loss. Whether it’s been a king-sized tragedy or dozens of dime-sized disappointments, no one has been immune. Loss has been our common denominator this year.

So I am sharing with you a piece from one suffering heart to another.

Part I will run this week. Part 2 will appear in my next posting.

I wrote the following just ahead of social distancing, limited hospital visits, and quarantines. I wrote it before so many  losses, including the loss of my friend, the subject of this piece. I hesitated in sharing it now, after her passing. But with all that 2020 has taken away from us, it seems like the right time to give something back.

My friend would have wanted that.

As I made my way down the long corridor lined with closed doors, words from a recent sermon seemed keenly real, “Doors separate worlds.” Each sterile door separated me from someone else’s painful story. My mind wandered to the familiar account of Abraham and Sarah in Genesis 18, sitting at the door of their tent, inviting the three strangers in for food and strength, trying to mesh worlds with them.

Though not strangers, I still wondered if we could pull it off.

With two shaky fingers, I gingerly pushed open the door marked 108a, terrified of what I might see on the other side. My world and hers came face to face.

She beckoned me in from her hospital bed, declaring with blunt acceptance,

My friend of 25 years had just been diagnosed with ALS, Lou Gehrig’s Disease. She had fallen and broken her foot, and in investigating the cause, doctors discovered the devastating culprit.

Before I visited, I had to do some research.

According to the ALS Association website, “ALS (amyotrophic lateral sclerosis) is a progressive neurodegenerative disease that affects nerve cells in the brain and the spinal cord. There is currently no cure for the disease. Once ALS starts, it almost always progresses, eventually taking away the ability to walk, dress, write, speak, swallow, and breathe, and shortening the life span.”

I felt inadequate and small in that hospital room with such big issues. Maybe there was a reason for those doors, to keep people like me out who aren’t qualified to understand.

I didn’t know what to say. I started having flashbacks of all the times she and her husband had been standing at my own hospital bed, and at the bedsides and curbsides and gravesides of countless others. They knew how to mesh worlds. Like Abraham and Sarah, they had so often sat by the door of their tent, to meet and comfort outsiders on their journey.

And my friend’s similarities with Abraham don’t stop there.

Within her reach, I saw her familiar, well-worn bible. I again thought about Abraham, the father of our faith. In their leadership roles, my friend and her husband have parented hundreds, if not thousands, along their trek to belief.

Yet, in all those similarities, I felt a strange notion that God was abandoning her now. And I feared she felt it, too. Her words cut into my own fragile faith that day.

Abraham may have uttered those very words, or at least harbored those sentiments.

Not long after the three travel-weary strangers entered the door to Abraham’s hospitality, they prophesied that he and Sarah would be parents of a son within a year, reiterating God’s earlier promises of a robust lineage. Sarah laughed, but Abraham must have taken stock of his current physical situation as well. Nearly a century old, Abraham had to consider the idea out of reach and outside reason. Perhaps Abraham had even let the dream begin to die.

Abraham, at his advanced age, was well-acquainted with his own physical limitations. It surely seemed long overdue for God to have stepped in and saved the day. And yet, somehow, his faith remained intact.

In retrospect, Abraham’s story is exciting and faith-building. But in real time, the pace of the plot must have been excruciating, as it can be for many believers. The starting out in faith is easy, the continuing is the battle. And along the way, when things seem hopeless in our physical lives, our faith can get flimsy. But as believers, we press into the hope that “what it is” is not all that it is.

As believers, we press into the hope that “what it is” is not all that it is. Click To Tweet

Paul David Hewson (aka Bono) is the lead vocalist in the band U2. No doubt his Christian beliefs colored his famous lyrics, “It is what it is, but it’s not what it seems.” Both Abraham and my friend seemed to know this, too.

“Against all hope, Abraham in hope believed and so became the father of many nations, just as it had been said to him, ‘So shall your offspring be.’ Without weakening in his faith, he faced the fact that his body was as good as dead—since he was about a hundred years old—and that Sarah’s womb was also dead. Yet he did not waver through unbelief regarding the promise of God, but was strengthened in his faith and gave glory to God, being fully persuaded that God had power to do what he had promised.” (Romans 4: 18-21, NIV)

But, with God, it’s not what it seems.

Three extraordinary faith lessons began playing out in that ordinary hospital room as I opened Door 108a.

My friend’s five simple words stung inside my ears. After hearing them, I stood silent on her side of the door. I remembered words from Beth Moore,

“No greater challenge exists in the human experience than accepting the reality that some things don’t fix.”

I couldn’t deny the reality she was living in as she wrestled with her diagnosis. I couldn’t comfort her. I had no scriptures. No words of wisdom or even of hope found their way to my tongue. The situation seemed decided and done.

Her words continued to haunt me even as that first visit ended. I thought her faith must be faltering. I bit back tears, wondering why God would do this to his long-believing daughter.

Though perhaps in less tragic ways, we have all been there. The circumstance is true. The diagnosis is accurate. The helplessness is real.

At that point, our only choice is to turn to the Helper.  It’s all You now, God.

It’s the first shaky step of every Christian walk: accepting the reality of our utter brokenness. Without that realization, faith has no place. Without acknowledging our hopelessness, we have no need for a Savior. Click To Tweet

It’s the first shaky step of every Christian walk: accepting the reality of our utter brokenness. Without that realization, faith has no place. Without acknowledging our hopelessness, we have no need for a Savior. Grace means nothing if we aren’t saved from anything. And that acceptance doesn’t put God out of business. In fact, it is essential for His work to fully develop, for His power to be made perfect.

In 2 Corinthians 12:9, Paul recounts God’s response regarding his own painful thorn,

“But He said to me, ‘My grace is sufficient for you, for my power is made perfect in weakness.’”

From Paul’s suffering and from Abraham’s example, we know we can face the crushing facts of our lives and still trust that God is at work. I can accept this harsh reality for my friend, and still believe in God, in His salvation, and in His ultimate healing. All the better for God’s glory to be revealed.

Before I visited, my world spun as normal. I imagined hers teetering on its axis on the other side of Door 108a. But my friend’s world was right with God. Not despite, but perhaps more accurately because of, her acceptance of her dire physical situation.

I repeated her phrase under trembling breath as I trudged back to my car. With  my friend’s honest words, my faith was becoming stronger when it should have been falling apart. And I was able to hold the door open to the tender notion that, just maybe, it’s not what it seems. 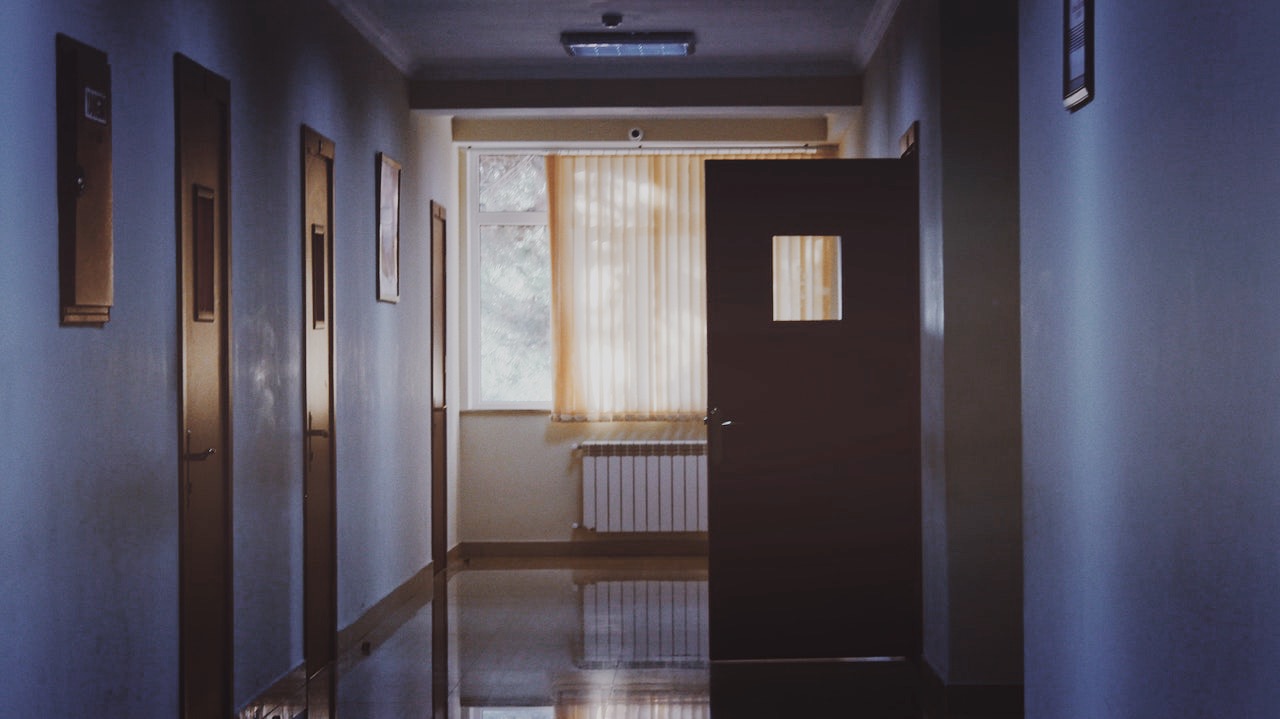