As we tiptoe into Year 3 of a pandemic many of us thought could never happen, I wanted to revisit some of my pre-COVID thoughts. I wanted to see if God still seems faithful, mighty to save, all-powerful, caring.

Even more palpable, perhaps, than what is happening with the pandemic is what may be happening in your own life. For me, chronic illness rolled into yet another calendar year. Best case, I’ll wake up every morning of 2022 in a body sustained by a heart I don’t want. A heart no one would want.

So when I heard the quip that the new year is actually pronounced “2020, too” it made sense to me. Here we go again. Perhaps you are there with me, with problems that didn’t reset with the Times Square ball drop.

Still, our God is a Guide who has been this way before.

Our God is a Guide who has been this way before.Click To Tweet

I remain thankful that over 2000 years ago, He came to a world in trouble. My world of trouble. One that, like 2022, hasn’t really changed that much. He came then, and now, not to rescue us from this marred planet and messy path, but to walk through it with us.

And He’s staked a flag at where we’re going.

Decades ago, my older, now-engineer brother constructed a complete, intricate N-scale model train. It was more just than a train engine, train cars, and track. It was an entire city. My brother and dad spent countless hours planning and building on that plywood platform, the size of a banquet table that resided in our unfinished basement, all the years I was growing up. It was assembled with enviable precision and patience, strictly off-limits to clumsy little sister hands.

Still, I would crawl into a chair and watch from an approved distance. Tiny buildings, waving families, intricate trees, even working streetlights‑—I was amazed at that powerful aerial perspective, taking in everything at once, down to the smallest detail.

It intrigued me that I could see all the obstacles on the track, ones the passengers and even train personnel would be oblivious to. From my vantage point, I could see the piece of track missing in the loop before the mountain. I could see the pencil carelessly left too close to the train’s path several feet away. I could see the abandoned train car just past the General Store.

From where I stood, I knew about the impending trouble long before the train arrived.

This is how I imagine God must perceive our lives. Seeing it all, the decisions and the consequences, the natural disasters and the neighborhood gatherings, the celebrations and the heartbreak, the accidents and the accolades, from beginning to end, unbound by our concept of time or sequential order.

It’s a comforting picture, with God as the Creator and Sustainer of the world. Nothing is unknown to Him. He’s keeping tabs on my heart function, and even my hair loss. He knows everything before it happens, just as my brother could see the tipped-over miniature tree blocking the track long before the train engineer in that tiny world ever could.

God was there during every uncertain minute of my six years with heart failure. From my initial shocking diagnosis, to my year and a half with no improvement, to my surprising appendectomy and sudden normalcy, to my heartbreaking decline then lower plateau over the past couple of years. Even though I sometimes doubted His care, doubted His involvement, doubted His power. He knew what was happening, He was watching, and He never stopped caring for me.

Even when all I could see was the obstacle on the track directly in front of me, God indeed held my whole lifetime in His hands.

GOD’S ALWAYS BEEN AHEAD OF US

Even better than just knowing about the future, He exists there. Wherever we are headed, God has already been there. Cancer, divorce, bankruptcy, depression, heart failure. He’s ahead of each one of us, building a track, turning on the lights.

Wherever we are headed, God has already been there. Cancer, divorce, bankruptcy, depression, heart failure. He’s ahead of each one of us, building a track, turning on the lights.Click To Tweet

And once He’s done that, our God stands above the concept of time, cradling our worries. Because worries are simply fears of an unknown future. And no future is unknown to Him.

Faith requires us to stretch our trust into that vast unknown. Into a future unknown to us, but fully known to God.

Corrie ten Boom says, “Never be afraid to trust an unknown future to a known God.”

A knowing God who’s out ahead of us.

A daytime pillar of cloud and a nighttime pillar of fire guided the Israelite children during their exodus from Egyptian bondage. In order to lead them this way, God had to be out in front of what was currently happening in their trek. Through four decades, God was way out ahead of these fearful Jewish slaves. He was already in the Promised Land.

God mentioned this going-ahead idea to some other shaky believers, too. Speaking to Moses, God said,

“And the Lord is the one who is going ahead of you; He will be with you. He will not desert you or abandon you. Do not fear and do not be dismayed.

God was also ahead of Jesus’ Gethsemane agony at the empty tomb, ahead of Mary’s hometown shame in Bethlehem’s manger, ahead of Joseph’s slavery sale in the King’s castle, ahead of Namoi’s grief with Ruth’s new son.

God works above and apart from our human, linear timeline. He sees it all and He is in every moment. Even, especially, the future.

We can say this because we all have God’s eye views of these going-ahead stories through His Word. But our stories are still being written, none less intricate or less beloved or less Spirit-involved than these. And yet, often we think of those as the main event. And our stories as footnotes…or less. That our lives are less God-touched, that our lives are somehow less important to God. Or to God’s continuing story. That He no longer bothers to go ahead of us.

These going-ahead stories are actually the foundation of every believer’s story and personal hope:

“For everything that was written in the past was written to teach us, so that through the endurance taught in the Scriptures and the encouragement they provide we might have hope.”

And that hope is the responsibility of us all:

Hope is not the privilege of the naturally optimistic; it is the responsibility of all who believe. Hope is the means by which we align not simply our plans but also ourselves with God. It is how we move toward the future he is preparing for us in order to join him there. – Hannah Anderson

Hope says He’s got this, and We can trust Him.

Someone who loves us enough to die for us is way out ahead.

Someone who loves us enough to die for us is way out ahead.Click To Tweet

LOVE PUT HIM THERE

Long after the final work session ended and plastic permanently covered my brother’s railroad village, something new filled our basement. My aunt delivered cardboard flats of silk corsages and bouquets she had made for my wedding. (Don’t judge. It was the 80s.)

Weeks later, my mom catered my wedding reception. That’s right, the Mother of the Bride. Everything was homemade from scratch, even the bread. (As a recent MOB, I can’t even imagine.) I had planned my ceremony in detail, but the reception was all her. Though I wanted certain foods, I left it to her to decide since she’d already handled my older sister’s reception. I remember going from the church to the reception hall after photos, carrying my aqua blue rose bouquet, knowing everything was taken care of, even though I had not set foot in the hall to prepare it. My mother who loves me beyond reason had already been there…somehow.

This God who lives in our todays and tomorrows is governed by love, too. He is a good Father. As we project into the foggy months ahead, it’s tempting to ask for certain things. But chronic illness has taught me that most days I don’t really know what I need.

I’d much rather He provide what He knows I need.

Like my brother, designer of the model railroad village, or a loving mother catering her daughter’s wedding reception, God sees where we’re headed.

And He’s already there. 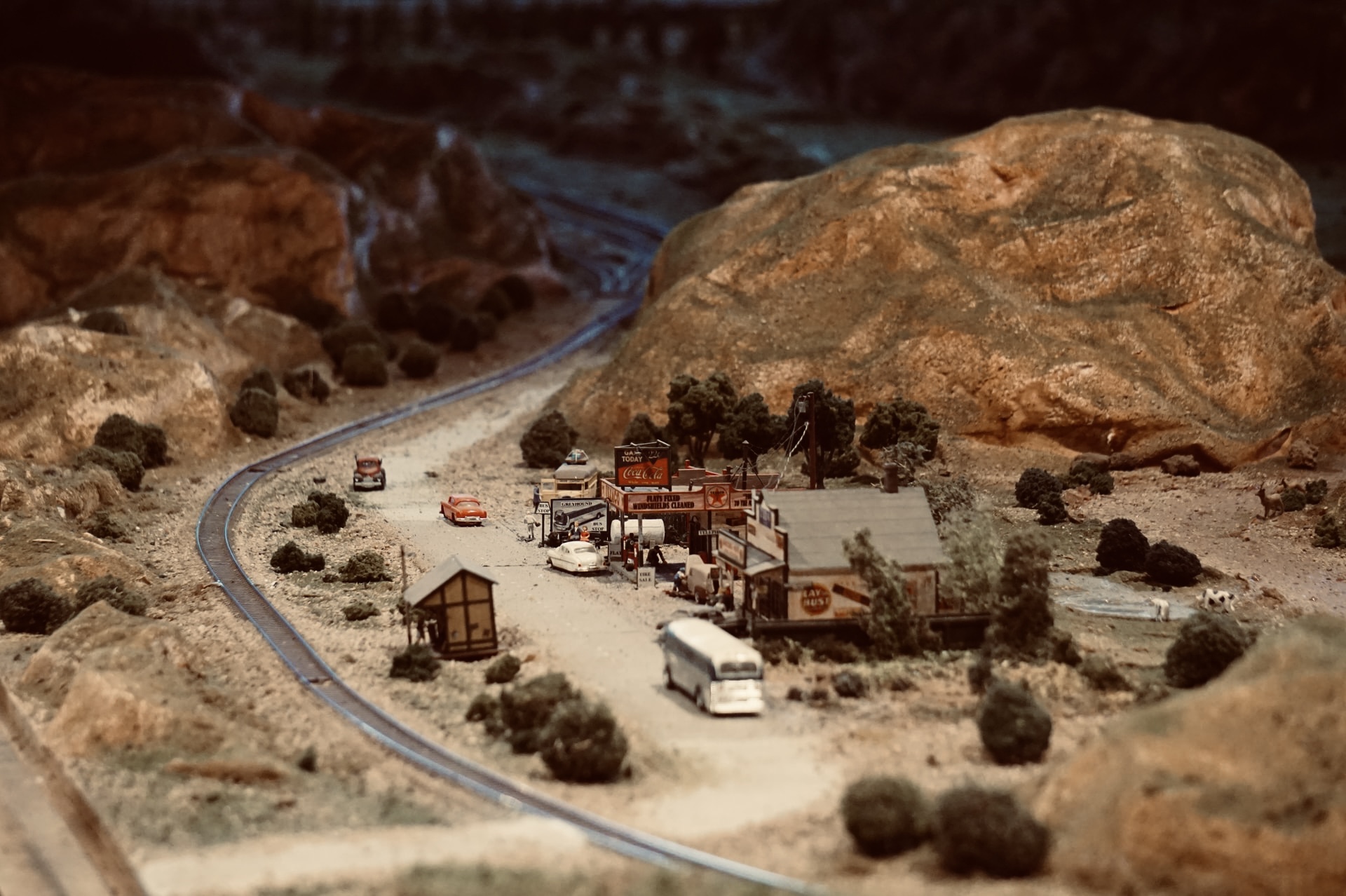